Half a horse is double the joy! Under this motto we're offering part-ownership to racehorses from Goerlsdorf. No matter if "Stall Adlerhost" or "Stall Emerald & Gestüt Görlsdorf" – each partnership has different own racing colours and shareholdings. New since this year: We do join in partnerships if the horse in question is an offspring of our SEA THE MOON.

One thing these partnerships all have in common: If a partnership horse does have a start, the pleasure in the paddock and during the race in a big group is double. That is also true for a morning visit on the training ground.

In the big racing countries England, Ireland and France the racing authorities do support such syndicates, because they are ideal for newcomers, who want to experience the fascination of horse racing close up.

In Germany so far it only works thanks to your own initiative but at Görlsdorf we are happy to support such ideas. We have a lot of fun with the just4turf, the racing stable of German Racing - Next Generation - the junior organization in German racing.

Do you have any questions? Don't hesitate to contact us info@goerlsdorf.com regarding Syndicate. 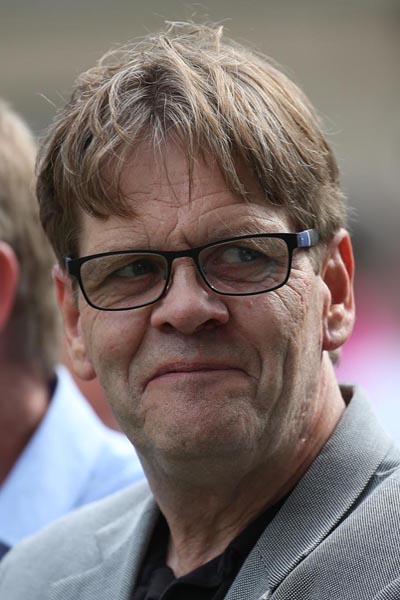 Since the project just4turf was founded in 2012 Görlsdorf has been supporting the idea with advice, action and horses. In the meantime the sibling of the youth organization GERMAN RACING - NEXT GENERATION counts almost 100 members, who celebrate the starts of their horses in big numbers on the racetrack.

Eight times they did see a winner like HUMOR, ANGREIFER orHOT LIKE MEXICO Their horses were placed 43 times and earned 71.975 Euros for the members.

There will be a premiere in 2019: For the first time there is a Club-Horse with Trainer Axel Kleinkorres in Neuss.

Colt by Sea The Moon out of Partygörl, Color: chestnut

For the FOMO syndicate

At the end of 2017 a new FOMO SYNDICATE was founded in Newmarket. It is women only under the leadership of trainer wife Vanessa Palmer. FOMO is an abbreviation for Fear Of Missing Out. As the first horse of the syndicate is a filly from the first year of SEA THE MOON, Görlsdorf-boss Heike Bischoff was happy to take the invitation to join the group.

The two year old filly has been name RACHEL ZANE. Royal TV-Experts do know that this is the film name of Meghan Markle, who will marry Prince Harry this spring, in the TV series Suits. So the expectations are running high that RACHEL ZANE will make it to Royal Ascot in summer and Meghan will join the Royal parade with her grandmother-in-law before the races.

Filly by Sea The Moon out of Mark of An Angel, Color: bay