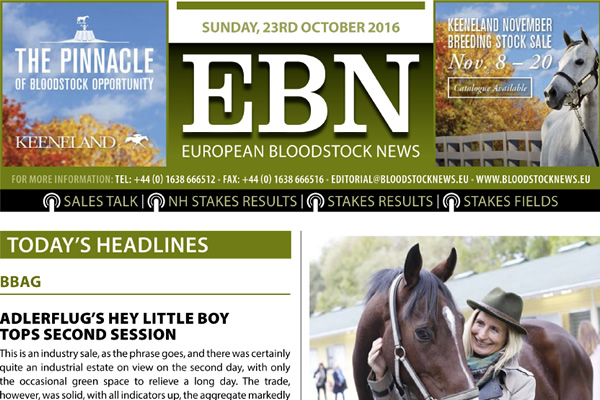 This is an industry sale, as the phrase goes, and there was certainly quite an industrial estate on view on the second day, with only the occasional green space to relieve a long day. The trade, however, was solid, with all indicators up, the aggregate markedly so with a larger catalogue, the exception being the clearance rate, which was pretty satisfactory all the same, given there were nearly sixty more generally modest lots than last year. Smiles all around for the BBAG team: CEO Carola Ortlieb seemed already happy after the first part of the Autumn Sales on Friday evening as 60 of the 82 horses in the ring were sold. In particular the high prices for some of the broodmares were surprising. World premiere at the BBAG Autumn Sales Baden-Baden this Saturday: For the first time there will be a foal of SEA THE MOON in the ring - a filly out of Secrets (Anabaa) born on April, the 21th. The unnamed brown foal will be presented by Römerhof Stud under the catalogue number 247. What a surprise: The ADLERFLUG-daughter has won the Gr.2 as 9/1-outsider, beating co-favourite PAGELLA in a dramatic finish just by a neck. On the final yards MEERGÖRL put her head in front - winning her second race in three runs. The penultimate race at Berlin-Hoppegarten was a three-year-old race was decided over 2.000 meters. Trained by Roland Dubasz, Herzprinzessin won the race with Martin Seidl in the saddle. The Kronimus Diana-Trial is a Listed race for three year old filies over 9 furlongs, with 25.000 Euros price money at stake. After her strong run in the Gr.3 Karin Baronin von Ullmann-Schwarzgold-Rennen in fourth place TICKLE ME BLUE was considered favourite. 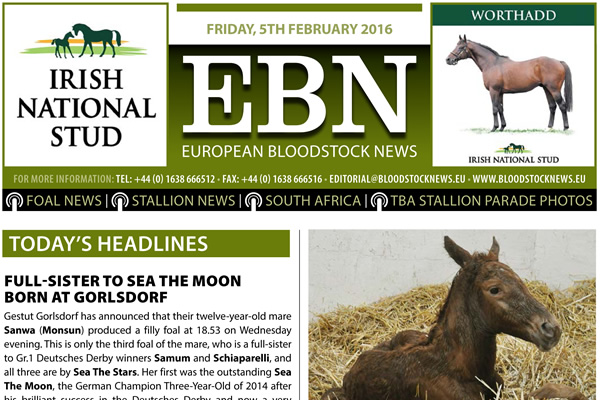 Gestut Gorlsdorf has announced that their twelve-year-old mare Sanwa (Monsun) produced a filly foal at 18.53 on Wednesday evening